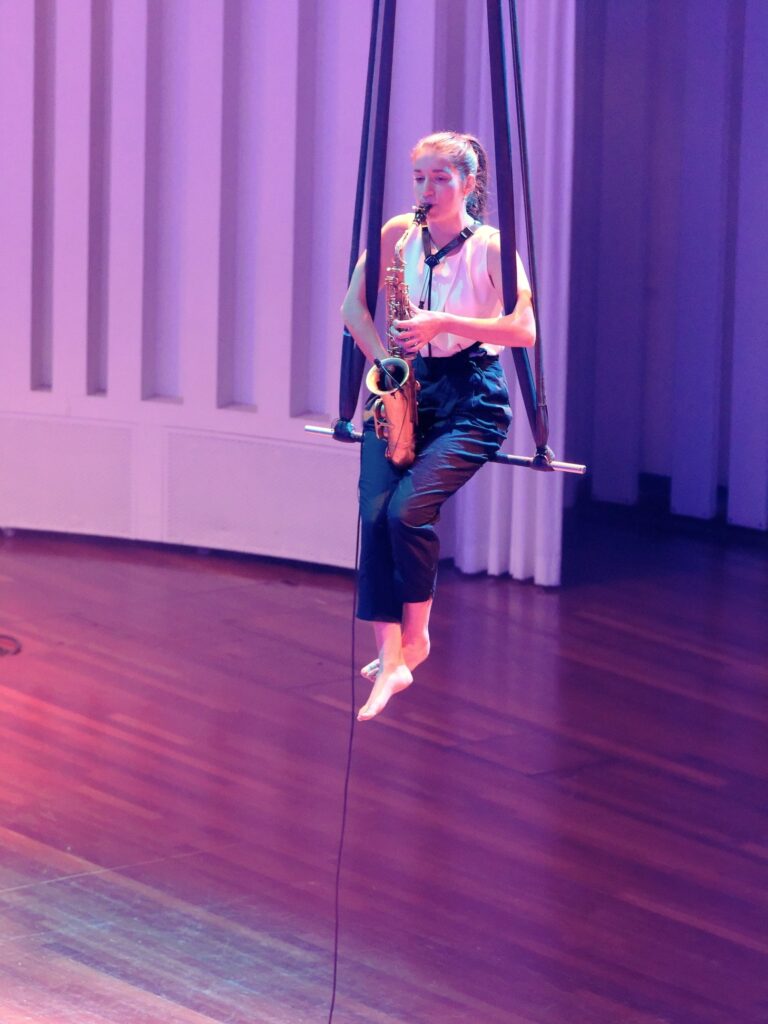 “Sonja can be characterized by three words: openness, passion and professional drive”

Sonja Oberkofler is a pioneering saxophonist, entrepreneur and educator from the Italian Alps.

A fierce advocate of contemporary music, Sonja has performed with world-renowned artists such as the All-star ensemble Bang on a Can, Asko|Schönberg and Temko. Her professional drive and attitude have resulted in collaborations with various composers Anthony Fiumara, Aart Strootmans, Aura Bouw, Steven Stoffels among others. Sonja has performed in the premiers of chamber, orchestral and operatic settings, including the dutch young talent opera „Het spel“, “Sekitei” by Ryo Noda and more.

As a chamber musician, Sonja played together with the Amsterdam Sinfonietta and Fontys Saxophone Ensemble for the dutch royal family. Her infectious passion for chamber music and transdisciplinary performances led her everywhere, from the Concertgebouw, National Opera, Tolhuistuin Amsterdam, “Bunker H” Bolzano among other alternative venues of performance to playing at festivals like the Bosch Parade, Oranjewoud Festival, Festival Classique, Theaterboulevard, Opera Forawrd Festival, Grachtenfestival and Alpen Classica Festival. Being a versatile musician, she collaborated with various circus artists, actors and dancers and performed in transdisciplinary performances as a saxophonist.

Sonja is a Newzik ambassador, winner of the Junior Grachtenfestival Pitch 2017 and nominee of the Jacques de Leuw Price 2020.

She studied in The Netherlands at the Academy of Music and Performing Arts Tilburg under the guidance of Ties Mellema, Niels Bijl and Juana Palop and in Switzerland at the Zürcher Hochschule der Künste in the class of Lars Mlekusch. Additional studies have been the Bad-Homburg Masterclass in Germany, Barcelona Modern Festival in Spain and more, with world-renowned saxophonists such as Claude Delangle, Arno Bornkamp, Jean-Denis Michat, John Sampen, Christian Wirth, Pawel Gusnar, Russel Peterson, Ryo Noda, Juan Martin Frasquier among others.

Next to her musical studies, Sonja is currently studying towards her masters degree in sports-, culture and events management.

In addition to her musical abilities, Sonja is passionate about personal development lifestyle engineering through mindfulness, nutrition, exercise, and mental training, which leads to her interest in holistic body-mind performance, for which she also holds a certificate in Performing Arts Medicine from the Performing Arts Medicine Association (PAMA).

"I have encountered few students as enthusiastic and hard working as Sonja. Sonja has gained a special place in my heart during her undergraduate studies. Sonja can be inspired by really anyone and everything but on the other hand she also has enough artistic wisecracks that she can bring herself, she is a true artist."

"Sonja is like a gift to a director. I experienced her as a very motivated, talented and open-minded instrumentalist. She came up with very good and original ideas herself and was able to relate to her physical role very well."

"Sonja is a multi-faceted interested musician. With enthusiasm, curiosity and drive, she explores the possibilities of the performing arts. Thus, lovers of theater and circus performances can also enjoy her talent. It is understandable how also the circus and theater love her. Her appearance of girl with huge instrument absolutely captures the imagination. I have very pleasant memories of our cooperation in which her commitment and musicality contributed to a heartwarming self-created theater story full of music. I wish her to continue to discover and enrich her instrument and herself as a performing artist. The audience will be delighted!"

"Sonja is one of the most open minded people AMPA has ever had. She is a saxophonist-composer interested in classical and new music, interdisciplinarity, education, electronics, mindfulness, nutrition, sports, mental health, organization, management, co-determination, languages... She is really passionate about combining all those important personal interests in her way of living as a musician. Her infectious enthusiasm has resulted in a large network of musicians, composers and artists who are eager to work with her. Working together with Sonja is all about purposefulness and preciseness. Her professional attitude and drive motivate her to be present at a lot of concerts, lectures, debates, expositions in the Netherlands, but also have already brought her in Italy, Germany, Spain, Switzerland, etc. And she worked with famous groups and artists like Bang on a Can and ASKO/Schönberg."

"Sonja entered my professional practice in the challenging role of production assistant to the composer of the enormous multidisciplinary open-air spectacle Bosch Parade. Because Sonja is an excellent musician herself, she managed to find time to concentrate on her performing duties. In a beautiful duet, she played the lead role in the ensemble of four professionals. She combines a great understanding of the needs of her fellow performers with an equally great understanding of the musical material she handles."